Domestic Goat or Goat is one of the most common farm animals all over the world. Significantly, the dairy goat breeds are the oldest defined breeds. The development of goat breeds mainly depends on meat, milk, hide, and fiber qualities. More than 300 goat breeds available in the world. All are not similar popular or productive.

The Goat has been domesticated since the existence of human beings in the world. Goats have many benefits: they need less space, less feed, easily adaptable to extreme climate, and mature very early. Goat is under the Bovidae family and falls in the Caprine sub-family. The scientific nomenclature of the Goat is Capra hircus and Capra aegagrus. The average age of maturity of Goat is 18 months, and live up to 15-18 years, and they live mainly on grass.

Goat Breeds of the World

There are more than 300 goat breeds found throughout the world. The breeds have mainly four categories like meat, fiber, milk, and Goat hides. In my article, I shall discuss the most popular 20 goat breeds for you. You will have a clear knowing of the specific breeds, its purpose, and its distribution. The Pigmy was a British dwarf goat breed stockily build in 1987. The breed was developed from African Dwarf goats of West Africa and Southern Sudan goats. At first, the Goat was kept as zoo animals and later become famous as companion animals. The Goat’s average height is 45 to 50 cm, weighing 12 to 18 kg; body-color is a roan, black or black-white mixture. The males have long beards, and both genders have long, curved horns.

Fainting Goat is a meat type American Goat breed. The breed was first brought to the United States of America in 1880. The other breed is Tennessee Fainting goat, myotonic Goat, nervous Goat, falling Goat, and stiff-legged Goat. They have a hereditary disease, Myotonia congenita. The distinct characteristics of the Goat are wide-body and heavy mass. The goat body weight is up to 200 pounds (90 Kg). Damascus is one of the largest goat breeds originates in Damascus, Syria. The breeds are famous for their extraordinarily long and flowing ear and bulldog-like appearance. The Goat is suitable for both meat and milk. The Goat participated in different goat shows and competitions. The other name of the breed is Shamee, Aleppo, Damascene goat. Nigerian dwarf is an American goat breed developed from the Dwarf goats of West Africa. The Goat was initially kept for showing and zoo animals. The Goat has resembled the largest dairy goats. The average milk production is around 1 kg per day—the lactation period of 305 days in lactation. The average body weight is 35 to 40 kgs.

Angora is one of the most popular and widely known domestic goat breeds in the world. The Goat was originated in Anatolia, Turkey, and transferred to Europe, Asia, America, Australia, and South Africa. Angora is a smaller size goat breed with excellent fiber commonly known as Mohair. Angora goat produces an average of 4-5 kg of Mohair per year. Turkey, New Zealand, America, and South Africa produced most of the Mohair of the world. Alpine is the highest milk producing goat breeds in the world. Alpine Goat originated in the French Alps and can sustain in any climatic conditions. The Goat can produce two gallons (8 liters) of milk a day. They are small, straight ears, short horns, and mostly in grey color. The Goat was brought to the USA from France and Switzerland and made more uniform. The average body weight is about 65 kg and height up to 30 inches. LaMancha is an American dairy goat breeds. The Goat also is known as American LaMancha or Lamancha. The Goat is recognized as dairy goats and can produce milk for up to two years without freshening. The milk of LaMancha containing high protein and butterfat. The distinct feature of the breed is tiny ears. They are sturdy, well-behaved, and docile goats. 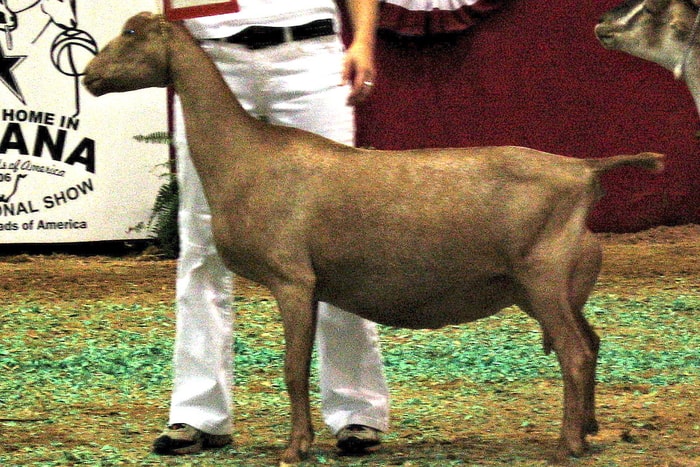 Cashmere is one of the most famous goat breeds in the world. The breed is well known for producing the finest quality Cashmere wool. The breed was found in China, Kashmir, Afghanistan, Turkey, Iran, Australia, and New Zealand. The Goat has an inner layer of fine wool in their body to protect them from extreme cold. The wool is collected by combing rather than shearing. China is the highest producer of Cashmere wool and has more than 123 million goats. Nubian or Anglo-Nubian is a British goat breed developed by crossbreeding of local British Goat and goats from India, North Africa, and the Middle East. The Goat is well known for its long-flowing ears and typical convex shape “Roman Nose” muzzles. The Goat is mainly bred for meat purposes. They are not good milk producers like other dairy breeds but milk containing high fat. Saanens are the largest dairy goat breeds of Switzerland. The breed originates in the Saneental in the Bernes Oberland near Bern of Switzerland. The average weight of a male Goat is 85 kg and female goat 65 kgs. The color of the Goat is mostly white. The Goat’s average height is 85 cm; they can adapt themself to any extreme weather condition. The average milk production is 3.5 litter dairy in a location period of around 260 days. The Saneen Goat has been distributed in at least eight countries. The total population of the breed is around 1 million. Many countries developed many varieties of the Goat by crossbreeding with local breeds.

Barbari goat is a small local goat breed of Pakistan and India. The name of the breed is taken from Barbers, a coastal city of Somalia, at the Arabian Seabank. The goat breed is distributed in Haryana, Punjab, Uttar Pradesh in India, and Shindu and Punjab province in Pakistan. The Goat has a compact body, short hair, and an average weight is 30-35 kgs. There is a presence of brown spots on the body coat. The breed is dual purpose and reared for both meat and milk. Jamnapari got is an Indian goat breed, and the name taken from riven Jamuna (Yamuna). The breed has ancestors of the African Nubian goat breed. The Goat is larger in size and body weight up to 120 kg in males and 95 kg in females. The color of the Goat is brown with white patches. The Goat has a concave nose giving a parrot-like appearance and long hanging ears. The Jamnapari breed is distributed to Bangladesh, Indonesia, Nepal, Srilanka, and Pakistan.

Read Also: 18 Most Common Cattle Diseases: You Must Know As A Farm Owner

Bagot is a small, semi-wild goat breed of England. The breed is considered extremely endangered in the present day. The Goat is producing the most delicate quality goat meat but is a lesser quantity. They have long-curved horns, distinct color variations like back in forequarters and white in the hindquarters. Black Bengal goat is a native goat breed of Bangladesh. The breeds also available in Bihar, West Bengal, Odisha, and Assam of India. The Goat is small, short-legged, mostly black, and compact body. The Goat is mainly reared for meat and hide. The Goat attained maturity very early and bred twice a year. In each breading gave birth 1 to 4 kids. The Black Bengal goat is producing the most delicate quality goat meat. Boer is one of the most famous goat breeds of the world due to its excellent capability of producing the most delicate quality goat meat. The Boer goat originated in South Africa, and the word “Boer” means Farmer. The color of the Goat is white with distinct brown heads. The kids of Boer goat growing very fast and attain 36 kgs within 90 days. Spanish Goat originated in Spain and was introduced in the USA from Spain to Mexico to America. The Goat is also called brush goat or scrub goats as they eat brush and other undesirable bushes. The Goat also reared for the best quality meat. They are hardy and robust goat breeds with adaptability to any environment.

Beetal goat breed is commonly found in Punjab, India. They are smaller than the Jamnapari and are good milkers. They have no standard color or markings. They are generally black, tan, white, brown, and heavily spotted on white. They have a Roman nose and long drooping ears. Bucks weigh up to 75 kg and females up to 50 kgs. They are prolific breeds are produce 2-3 kg milk daily. They respond very well in specific breeding, feeding, and management conditions.

Toggenburg goat is a very high milk-producing breed that originated in Toggenburg Valley in Northeast Switzerland. They originally came from the Swiss Alps. The goat has light fawn to dark chocolate, with two white stripes on the face and white on the legs below the knees. They are hornless or disbudded, straight or dished nose and erect ears. Toggenburg goats are medium-sized, sturdy, and vigorous. Mature bucks weigh up to 90 kgs. They are also good milk producers and can produce 800-1000 kg of milk per lactation in 200 days. They have good developed udders and can continuously milk up to two years without refreshing.

Iris goat is a goat breed that originated in Ireland. The goat found more than 5000 years ago in Iceland and one of the oldest goat breeds in the world. They have long-curved horns and long-haired body coats. Goats are one of the most popular domestic animals throughout the world. Goats help humankind by providing meat for a living, milk for nutrition, and hides for clothes. Goats are also reared for companion animals and showing purpose. In some religions, goats are reared for religious purposes. In my article, I have discussed the most popular and widely used 17 goat breeds globally. I think this article will help the academician and farm owners. If you like the article, please share it with your friends through social media.

Thoroughbreds are the most famous horse breed because of...
Cat

Bovine Tuberculosis is an infectious disease caused by individual...
Birds

Parrots are the most common and loveable pet birds...
Horse

The versatile Morgan Horse is the earliest horse breed...
© Copyright - 2022. All Rights Reserved.