The hormone is a physiologic organic chemical substance produced and secreted by endocrine glands that pass into the circulatory system for transport. Hormones inhibit, stimulate or regulate the functional activity or target organ or tissue. However, organs like the uterus and hypothalamus produce hormones that do not meet the classic definition. Reproductive hormones are highly specific and selective in their action on the genetically conditioned target organs, and hormones are squired in different amounts in different species to produce a specific effect.

There are as many as 17 hormones are directly involved with equine reproduction. The hormones have been produced in the hypothalamus, pituitary gland, and gonads. The hormones are not species-specific in their action, as the estrogen hormone of women or mares, when injected into a cow, produces the same effect as the cow’s estrogen. Classification of Hormones of Horses

Hormones may be classified according to their mode of action and chemical properties. You may find many other classifications, but the most common types of reproductive hormones are classified as such.

Mode of Action of Hormones

These indirectly influence reproduction and are responsible for the general well-being, metabolic state, and growth of animals which permit the full effect of primary reproductive hormones. Based on Chemical Structure, Hormones May be Classified into 3 Groups.

These are polypeptide and glycoprotein in nature, having a molecular weight of 300-7000 daltons. Since enzymes quickly digest them, they cannot be given orally and must be administered by injections only, e.g., FSH, LH, oxytocin, insulin, prolactin, TSH, HCG, relaxin, etc.

These have a molecular weight of approximately 300-400 daltons. Natural steroids are not effective by oral administration, but synthetic or plant steroids can be administered both orally and parenterally, e.g., estrogen, progesterone, and aldosterone.

These have a molecular weight of approximately 400 daltons and can be administered by injection only since they are digested orally, e.g., epinephrine, norepinephrine, thyroxin, etc. Functions of Reproductive Hormones of Horses

A. Hormones Secreted by Hypothalamus

1. GnRH (Gonadotropin-Releasing Hormone). It is a decapeptide hormone with a molecular weight of 1183 daltons. This hormone induces the release of both FSH and LH from the anterior pituitary.

4. TRH (Thyroxin Releasing Hormone). It stimulates the release of thyroid-stimulating hormones and prolactin.

6. CRH (Corticotropin-Releasing Hormone). It stimulates the release of ACTH. 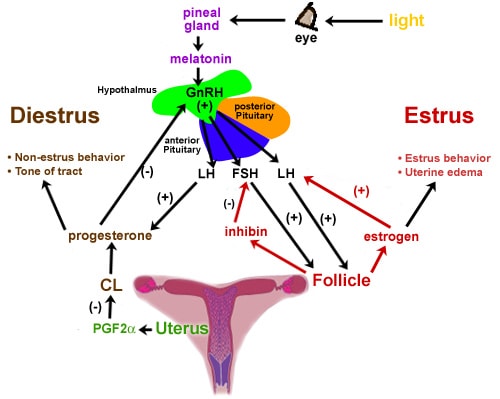 The hormones of the anterior pituitary that act on the gonads are collectively called gonadotropins. The gonadotropins stimulate Gonads in both stallion and mare. There are mainly three gonadotropin hormones:

7. FSH (Follicle-stimulating hormone). FSH stimulates the growth and development of ovarian follicles and the production of estrogen from growing follicles.

8. LH (Luteinizing hormone) This hormone is responsible for the ovulation and transformation of granulosa cells of rupture follicle to CL. The presence of LH is necessary for the maintenance of CL and secretion of progesterone. LH acts in conjunction with FSH to induce estrogen secretion from the developing follicles. In stallion, it is called ICSH, and androgens are produced only after LH stimulation. The hormones that are secreted by the posterior pituitary gland of the brain are directly involved with horse reproductive activities are:

10. Oxytocin Hormone. Oxytocin is synthesized in the supraoptic nuclei of the hypothalamus and is stored and released from the posterior pituitary. Estrogen enhances the effectiveness of smooth muscles to oxytocin. The ovary also produces oxytocin. The main functions of oxytocin are:

11. Estrogen Hormone. The most common estrogenic substance is estradiol, and the other two estrogens are estrone and estriol. Estrogen is produced from the ovary under the influence of LH & FSH. The main functions of estrogen are:

13. Testosterone Hormone. The testosterone hormone is produced by the Leydig cell of the testis. The hormone is responsible for developing reproductive organs, behavior, and manifestations of signs of maturity in stallions.

14. Relaxin Hormone. Mainly secreted by the uterus, also known to be secreted from CL and placenta. It causes dilation of the cervix and vagina before parturition.

15. PMSG (Pregnant Mare Serum Gonadotropins). A glycoprotein hormone secreted by uterine endometrium during 40-140 days of pregnancy in mares. PMSG has both FSH-like and LH-like activity, but predominately it has FSH-like action. Secretion of PMSG stimulates the development of ovarian follicles, some of which ovulate and develop into accessory CL which produces progesterone. PMSG is also used clinically to induce superovulation.

16. HCG (Human Chorionic Gonadotropins). Glycoprotein hormone is present in the urine of pregnant women. It can be detected in urine eight days after conception by RIA (Radio Immune assay). It has mainly LH-like action and little FSH activity. It can be used for induction of ovulation and to treat cystic ovaries.

17. Placental Lactogens. Placental lactogens have been found in several species. These hormones are protein in nature with properties similar to growth hormone and prolactin. It is more imp for its growth properties than for prolactin properties. Placenta lactogen is imp in regulating maternal metabolism to ensure the availability of adequate nutrients to developing fetuses.

These hormones are not directly involved with the reproductive activities of the stallion and mare. Their actions help in the growth and development of organs, systems, and associated activities. The hormones are:

Equine contagious abortion is a specific disease of horses...
Dog

The Azawakh dog breed is a protective, loyal, tall,...
Dog

Brucellosis in dogs is a contagious infectious disease of...
Companion Animals

Dogs are the proven best companion of the human...
Dog

Osteochondrosis in dogs is an endochondral ossification defect, the...
Farm Animals