The standard definition of a breed is that a group of animals has certain distinguishable traits such as conformation, function, and color. Breed registers of horses depend on correct identification to ensure accuracy of origin and establish standards for the fair exchange of horses between the seller and buyer. In my article, I shall highlight and list the most common American horse breeds. The Standardbred horse is called the American Trotting horse and was developed by cross-breeding Thoroughbred, Morgan, Norfolk Trotter, Barb, and Canadian Pacer horse. The name Standardbred comes from the practice that began in the 1800s of registering horses that trotted or paced the mile in legs more diminutive than the standard time. Morgan is the only American breed named after a horse. No other horse has such a distinction as Justin Morgan, the foundation stallion of the Morgan Horse. The stallion was Figure as a foal and took his adult name from his owner, as was the custom in the late 1700s. He followed Justin Morgan from Massachusetts through and around Vermont. The name ‘Appaloosa’ was derived from the slurring of “A Palouse” to form Apaloose, which later become Apaloosic and is now Appaloosa. The horses with the colorful characteristics of the Appaloosa appear in Chinese art dating from 500BC and in Persian and European art of the 14th century. Spanish horses are the basis of present-day Appaloosa horses. The American Saddlebred originated in the United States, and the type evolved as the country’s needs changed. The residents of the bluegrass region of Kentucky and Tennessee, Virginia, West Virginia, and Missouri desired an easy-riding, general-purpose type of horses for the plantation and hilly grazing areas. The first name given to the horses of this type was the Kentucky Saddler. The Paso Fino Owners and Breeders Association (PFOBA) registers all strains and crosses of Paso Fino horses. Most imported Paso Fino horses registered by PFBOBA have come from Puerto Rick or Colombia. The Paso Fino shows all solid colors and roans and spotted, cream, buckskin, and palomino patterns. 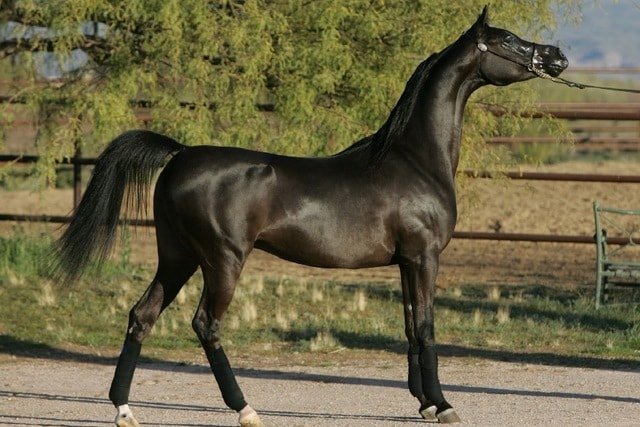 The thoroughbred horse was developed in the United Kingdom and is a famous horse breed throughout the world. The horse is also readily available in America and dramatically contributes to the development of American horses. The Saddlebred, the Morgan, and the Tennessee Walking horses were developed as a general-purpose breed for riding, driving, and farm works. The history of the breed, which originated in the Middle Basin of Tennessee, traces to contributions of Standardbred, Thoroughbred, Morgan, American Saddle horses, Canadian pacer, and Narragansett, as well as less well-record stock.

The Fox Trotting horse of America was developed in the 10th century on the Ozark Mountains of southern Missouri and northern Arkansas to meet the need for riding horses that could travel a long distance with a comfortable gait at a speed of 5-8 miles per hour. With the resurgence of riding in the 1960s, these horses were well suited for pleasure and cross-country trail riding. The Peruvians are proud that their Paso developed solely from horses brought to Peru by the Spanish Conquistadores. Peruvian Pao is known as termino, a flowing movement in which the forelegs roll to the outside as the horse strides forward. Horses of pure Peruvian blood are eligible for registration by the Peruvian Paso Horse Registry of North America. The Galiceno is a petite, sturdy horse of 12-13.2 hands. The size of the horse is like a pony, but all other characteristics are a horse. These horses have been imported from Mexico since 1959. The breed is thought to be originated in the 16th century in Spain in the ancient province Galicia of Spanish Jennet and Barb breeding. The crosses between Morgan and Arabian horses have been made since the 18th century to complement the strengths of the two breeds. After World War I, the cross gained popularity as a family pleasure and wrench horse. The Morab horse registry, however, was not established until 1973. The American Paint is one of America’s most famous horse breeds that was developed by cross-breeding of Arabian, Spanish, Barm, and Andalusian horses. The horse is well-known for its distinct spotted color pattern. There are more than 100,000 horses are registered throughout the 40 countries of the world. Pinto is not a breed; instead, it is a color pattern. The horse has large irregular patches of white or any other color on a solid-colored horse. The color pattern of American Quarter Horse and Thoroughbred horses are registered as Pinto horses. The Palomino is genuinely the golden horse. Palominos are registered according to color and not to type except that pony and draft breeds are excluded. The color is approximately that of an untarnished United States gold coin. The mane and tail are white or near white, with no more than 15 percent darker hairs. The body coat of the Buckskin horses is predominantly a shade of yellow, ranging from gold to nearly brown. The points of the horse (tail, mane, and legs) are black or dark brown. A genuine Buckskin, the dorsal stripe, shoulder stripe, and barring on the legs is always present. The white horse is the horse of heroes, history, art, and fiction. The children who grew up in the 1940s remember the Lone Ranger’s horse, Silver. The Thompson of Naper, Nebraska, contributed to the history of the white horse when in 1918 they purchased Old King, a white Stallion of Arabian and Morgan breeding. He was the foundation of the American Albino registry set up by Thompson in 1937. A native American Indian incorporated the American Indian Horse Registry in 1961 to collect, record, and preserve the pedigree of the horses the Indians originally obtained from the Spanish herds. Descendents of these horses figured prominently in American history, particularly that of the southwestern United States. The first horses of Chickasaw Indians of Tennessee and North Carolina were captured from the members of the 1539 expedition of DeSoto. These tiny, short-coupled, well-muscled horses were popular with early colonists for general purpose use, although not for distance running. The American Mustang horses descended from the earthly Spanish horses. The American Mustang Horse Association hs began a studbook and, unlike many Mustang registries, holds a national and several Mustang shows. The horse must be 13.2 to 15 hands, and any color is acceptable. 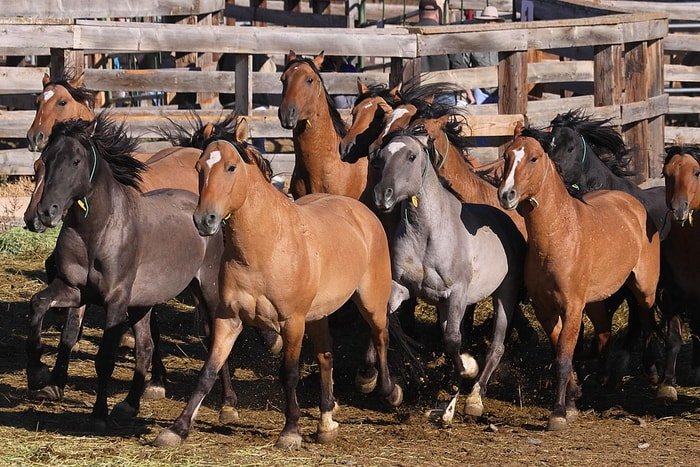 The American Bashkir Curley horse breed is named for horses with curly coats raised in the Bashkir region of the Ural Mountains of Russia. Most of the horses have smooth and straight hairs. However, the horse originated in the United States from the three curly-coated feral horses found in 1898 on a ranch in Nevada. The Colorado Horse Ranger Association develop the horse from three foundation stallions of pure Barb, pure Arabian, and Spotted horses with local horses Nez Perce in 1878. Rangerbred horses are spotted and often confused with Appaloosa horses. Last 30 years, only 50 horses were registered as this breed, but most of them registered as Appaloosa. The Pony of the Americas (POA) is a true American pony breed developed by crossing Shetland stallion and Appaloosa mares in 1954. The POA is as tiny as suitable for children and as big as to train and break them. The average height of the POA is about 45 to 54 inches. The American Walking Pony was developed in 1950 at Browntree Stables in Macon, Georgia. Mrs. Joan Brown chose to cross the Tennessee Walking horse and the Welsh Pony to form a breed of Walking pony to be used as a pleasure and show pony. The Americana is a synthetic pony breed developed in 1962 by crossing Shetland and Hackney ponies to produce a miniature Saddbred type of show pony. The disposition and conformation have come from the Shetland; the action, animation, and slightly larger size came from the Hackney. The Trottingbred is a synthetic breed that originated in the 1960s from crosses between Standardbred and Shetland, Hackney, and Welsh Pony. The horse was develo[ed for sulky racing purposes. Some pones are racers, and other ponies are trotters like Standardbred horses. The maximum height of the horse is 12.3 hands (51 inches), and the pony is registered in the International Trotting and Pacing Association. Many miniature horses were developed in America. The miniature horses are like the original horses, and they are dwarf in size. They are most susceptible to accidents and attacks by packs of dogs due to their small size. Falabella is the petite horse in the world developed from an Argentine horse breed. The United States of America is the house of many horse breeds. Almost all horses of the world are found in America. American horse breeds are developed from these horses. Horses played an important role in the history, agriculture, economy, and even wars of this continent. American horses are an essential part of sports, recreation, pleasure, and society in the modern age.

Horse Grooming: Everything You Must Know As A Horse Owner

Sheep are classified in the subfamily Caprinae, and all...
Horse

Wobbler in horses or cervical vertebral malformation(CVM) is a...
Horse