The Vet Expert
HomeBirds22 Most Common Types of Ducks You Must Know As A Duck...
Birds

Ducks remain wild as well as domestic with worldwide distribution except for Antarctica. Ducks have spoon-shaped bills. In some ducks, the bill’s edges have rough, groove-like notches, called serrations, which kept hold of elusive praying other ducks; the serrations are more delicate and are used only to strain the water from food. Ducks vary in color from brilliant iridescent greens, bronzes, and purples to dull grays, lusterless whites, and drab browns. Different types of ducks is a question to many duck lovers.

Interesting Facts About Types of Ducks

Ducks are one of the most common poultry birds. The ducks are a graceful swimmer and diver, but it moves with a clumsy waddle on land. Ducks feet can not feel cold even if it swims in icy cold water because its feet have no nerves and blood vessels. Several ducks can fly at speeds close to 50 miles per hour ( 80km/ hour ). Each species of ducks has its eating habits. Ducks usually eat grass roots, water plants, wild rice, the seed of all types, small nuts, berries, grains, small fish, shellfish, leeches, crayfish, frogs, salamanders, and tadpoles. Some ducks feed by diving for fish. Others feed on corn and other grain fields, in marshes, and along the banks of rivers and lakes. Ducks are suffering from fewer diseases than chickens. The wild Duck usually chooses and remains with one mate for a season, but the domestic Duck changes mates between broods. Female ducks of most species lay 6 to 12 eggs. Some species may lay as many as 20 eggs. How Many Varieties of Ducks are There?

Many duck lovers search for the types of ducks in books and the internet. Most of the sources provided incomplete and haphazard information. I have tried to give almost all the information on different types or breeds of Duck for you in my article. Domestic ducks are ducks that are raised for meat, eggs, and down. Most domesticated ducks originated from the wild Mallard (Anas platyhynchos ), which a minority are descendants of the Muscovy ducks. The mallard duck has first domesticated in China hundreds of years ago. The first recorded breeds of Duck were found from the Netherlands, where it was used as a decoy and known as a Coy or Decoy duck. The call duck is a bantam breed of domesticated Duck raised primarily for decoration or as pets. The call duck is energetic and active. It is small, weighing around 0.68 kg, with a plum bowl-shaped body, a comprehensive, rounded head, tiny, broad bill, and short legs. It is vocal with a high-pitched call, and the bird’s standard color is white, Gray, Blue, Buff, Pastel, Khaki, Butterscotch, Chocolate, Snowy, Spot, and Black and White. The Mallard or Wild Duck, probably the best known and most recognizable of all ducks, is a dabbling duck that breeds throughout temperate and subtropical America, Europe, Asia, New Zealand, Australia. The Duck is 56 to 65 cm long, has a wingspan of 81 to 98 cm, and weighs 0.9 to 1.2 kg. They are omnivores, and they also graze on land, feed on grains and small plants. The Indian Runner duck is a domesticated mallard that originated from South-east Asia, including Esat India, East Indies, Bali, Indo-china, Malaysia. This breed is one of the most identifiable duck breeds because of its unusual upright carriage and bottle-shaped body. Their slim bodies and long necks give them the look of a ‘wine-bottle’ with a head and neck. The average weight is 1.4 and 2.3 kg; their height ranges from 50 cm in small females to about 66 cm in the taller males. The Bali duck is a lightweight breed and raised for decoration or as pets. Although they are good layers, it is similar to the Indian Runner duck, differing only in having a crest on the top of the head. Its weight is around 2.25 to 2.75 kg with a slender upright body. They come in various standard colors, but the most common are white, brown, and malware coloring. It produces 120 to 250 eggs per year, and these eggs are blue-green to white. The Duck is a lightweight breed of domesticated Duck, and it is named for its distinctive black and white plumage. The bill is yellow or orange but turns green in older birds, and the chest is rounded and the neck moderately long. The legs and feet are orange but may be mottled. Males weigh around 2.7 kg and females around 2.5 kg. They are hardy, active foragers and live for about nine years. All-purpose ducks were named after the home town ( Orpington, kent ) of the man who originated the breed, Mr. William Cook of England. The Orpington is a medium-sized duck weighing around 7 to 8 Ib. they usually look quite smart as they do not show dirt as much as white plumaged ducks. The life expectancy of domestic ducks kept as pets are 8 to 12 years. Khaki Cambell is a breed of domesticated Duck kept for its high level of egg production. They originated in England. In the late 1800s, Adele Campbell purchased a Fawn and White Runner duck, an exceptional layer. The breed was introduced to the public in 1898. There are three varieties, which include Khaki, Dark, and White. The body weight varied from 2.5 to 3 kg in adult males and 2 to 2.5 kg in females. Cayuga originated in Lake Cayuga, Cayuga country, New York. They have broad, long bodies, meat ducks, and are a beautiful breed mostly for show. They are rare, a gorgeous dark black with shimmering green feathers, and their feathers turn lighter as they grow older. Male Cayuga ducks are weight 3.62 kg and female 3.17 kg. They are seasonal layers and lay large, dark, grey to bluish-green eggs. 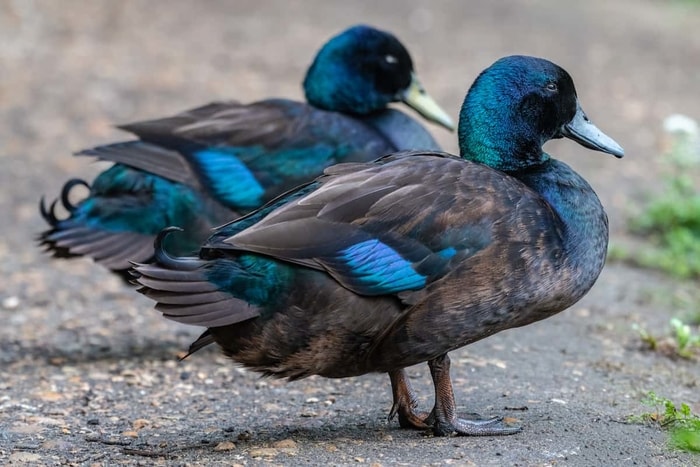 The Crested Duck (Lophonetta specularities) is a Duck native to South America, the only member of the monotypic genus Lophoetta. There are two subspecies L. specularioides alticola (Andean crested Duck) and L. sp. Specularioides (Patagonian crested duck). This breed is reared worldwide in captivity. It is a medium-sized duck with a plump body, short legs, and a flat, rounded bill. They weigh 4 to 6 Ib (2-3 kg). The Duck originated in Aylesbury, Buckinghamshire, Great Britain. They have white plumage with a pink bill and bright orange feet and legs. The pink nose coloring is a vital and critical characteristic of the right breed. It is one of the largest known species, and drakes weigh 4.5 to 5.4 kg and females 4.1 to 5 kg. They are very efficient converters of feed. The Muscovy duck is a large duck that is native to Mexico and tropical America. They are a South American species originating from Brazil, and this Duck is domesticated worldwide. Muscovy is the largest of all ducks, and they are excellent flying ducks, and it likes to roost in trees. The drake is about to 86 cm long and weighs 4.6 to 6.8kg, while the hen is much smaller, 64 cm in length and 2.7 to 3.6 kg in weight. Pekin duck is a breed of domesticated Duck used for egg and meat production. This breed has been farmed since at least 2500 BC in the Beijing area of China. They have fast growth rates and good feed conversion. Drakes will reach a live market weight of about 4.08 to 5.44 kg in 6 weeks. The Duck is characterized by a yellow bill and creamy white plumage with orange shanks and toes. Their lifespan ranges from 9 to 12 years. The Duck is a heavyweight breed of domesticated Duck raised for decoration or general-purpose. The breed originated in France sometime before the 19th century. They have green heads, white colors, a deep claret breast, and blue speculum feathers, but they are brighter in color and more extensive than Mallards. Bodyweight varies from 2.7 to 3.6 kg, and drake weighs 4.08 to 5.54 kg and hen 3.17-08 kg.

The Orpington ducks were named after the home town ( Orpington, Kent). The Duck is a medium-sized duck weighing around 7 to 8 Ib. the plumage coloration in females fads as they grow old. Blue Orpington duck is much less common than the Buff or Pingto duck, and Buff Orpington duck is a descendant of blue Orpington duck breeds. Buff is the most popular color, and the other colors like white, black, chocolate, and blue have all but disappeared. The Duck is a fan-shaped and small breed with a thin bill and collapsible crest. The Duck is the only breed that specializes in eating fish. The adult female bird has a greyish-brown body, with a narrow white patch over the lower breast and belly. The female’s eyes are brown. Their average length is 40-49 cm, and the weight is about 453-879 g. Dabbling duck is a kind of shallow water duck that feeds along the water’s surface and tips headfirst into the water to graze on aquatic plants, insects, and larvae. There are 50-60 different ducks considered to be dabbling species. The birds are very vocal birds, and both males and females are vocal. The breeds are infrequent divers and are usually found in rivers, small ponds, and shallow water. The most common dabbling duck is the mallard duck. Eider is large, heavyset sea ducks with a distinctive long, sloping frontal lobe of the bill that extends almost to the crown. Their average length is about 19.7-28.0 inches (50.71.1 cm), and the average weight is 45.9-92.1 0z (1300-2611g). The females are warm brown with dense blackish barring and black bill, and the males are white above and black below, with a black cap, and green to the yellow-orange bill. The diving duck, others name pochards or scaups, are a type of Duck that feeds on diving beneath the water’s surface. The ducks are mostly gregarious and mainly found in the freshwater and estuaries. The birds are strong fliers and agile swimmers and in search of food, including fish, insects, and aquatic plants beneath the surface of the water. Their average length is 41-56 cm, and the weight is 700-930 g. Perching ducks are species of waterfowl that inhabit wet woodlands, perch on branches, and nest in holes in trees employing their long-clawed toes. The breeds are closely related to dabbling ducks, it resembles the dabbling ducks, and their feeding habits and behavior are similar. The Scoter duck is a large sea duck that is black scoter, or American scoter, is characterized by its bulky shape and a large bill. They are distinct vocalizations birds, and the adult female averages about 980 g and 45 cm in length, while the adult male is on average 1100 g and 49 cm in length. The drakes are mostly black and have swollen bills, and the females are brown. Final Talk on Types of Ducks

Ducks are the most common and well-known water foul. They become domesticated since the existence of human beings on this earth. There are different kinds of ducks, and all are not domesticated or similar important. In my article, I have highlighted the most common duck varieties for you. If the above article helps you, please send it to your friends and family through social media.

The skin is the biggest organ of the animal...
Farm Animals

Contagious Ecthyma in Goats: Important Disease of Sheep and Goats

Anaplasmosis in cattle or gall sickness is an infectious...
Dog

The hound dog breeds are one of the most...
Horse

Connemara pony is an excellent show pony or Ireland...
© Copyright - 2022. All Rights Reserved.