The Horse evolved as a wondering continuous grazing herbivore and is selective in what it eats, preferring certain species of plants to others. The horse digestive system evolved in this natural pursuit of a forage diet but the modern horse is asked to perform physical activities that have necessitated a major change in natural horse diet. The digestive system of the horse has a dual function like a simple stomach animal and compound stomach animals. The mouth is the start of the horse digestive system and having teeth, tongue, cheek,  palate, and pharynx. The mature horse has 18 upper and 18 lower teeth consisting of 6 upper and lower incisors and 12 twelve upper and lower molars. The function of teeth is prehension ( gathering) and chewing and they participate in the digestive process by reducing the particle size of ingested food. Chewing stimulated the flow of saliva, which aids in digestion and swallowing. Hereditary dental problems such as parrot mouth ( overshot) and monkey jaw (under-shot) seriously impair the ability of the horse to gather and utilize food. The horse has fewer dental problems compare to humans, but when they occur horses lose weight and waste feed so annual dental examinations should be a part of the horse management program. As horses age, wearing of the teeth occurs, as a result of which sharp edges may develop on the outside on the upper teeth and inside of the lower teeth. These results in irritation to the cheeks and tongue causes ulcers and lacerations. When these occur it is necessary to ‘rasp’ or ‘float’ the teeth using a file-like instrument to remove the offending sharp edges.

Recommended Read:18 Most Common Horse Diseases: You Must Know As Horse Owner

After the teeth have been rasped a considerable improvement occurs and the horse no longer wastes food, is a more efficient food converter, gain weight, readily accepts the bit, and is more amenable to training. The knowledge of teeth and its problem is very necessary to study the horse digestive system.

The esophagus is a long muscular organ that moves food from the mouth to the stomach by peristaltic wave or muscular contraction. Saliva produced by the secretory gland in the mouth helps lubricate the passage of food; consequently, chocking and obstruction within the esophagus are rare. The stomach of the horse is similar to that of the pig only larger and has a capacity of about 16 litters. The capacity compared to the rest of the gastrointestinal tract is small and had contributed to the horse being a contentious grazer able to handle many small meals rather than several large ones.

The Function of Stomach

It is therefore advantageous to split a large amount of feed into small portions rather than providing too much feed at one time; these decrease the incidence of digestive problems associated with colic and enterotoxemia.

Digestion in the stomach is facilitated by the secretion of hydrochloric acid and enzymes, which include pepsin and trypsin. Because of the small capacity of the stomach, it empties quickly so that food eaten at the beginning of a meal is already in the small intestine before feeding is completed.

The small intestine is a tubular structure approximately 21 m long, holds about 56 litters of ingesta, and is composed of 3 segments, the duodenum, the jejunum, and the ileum. The small intestine is the major area for the absorption of protein, fat, carbohydrate, and some minerals. Enzymatic digestion which began in the stomach continues in the small intestine with enzymes secreted by the pancreas and intestinal mucosa. The most important part of the horse digestive system is cecum. The cecum of the horse performs the same functions as the rumen of the cow and sheep and is the major area of microbial digestion. Microorganisms present in the cecum are capable of digesting fibrous feed producing a major energy source, the volatile fatty acids. 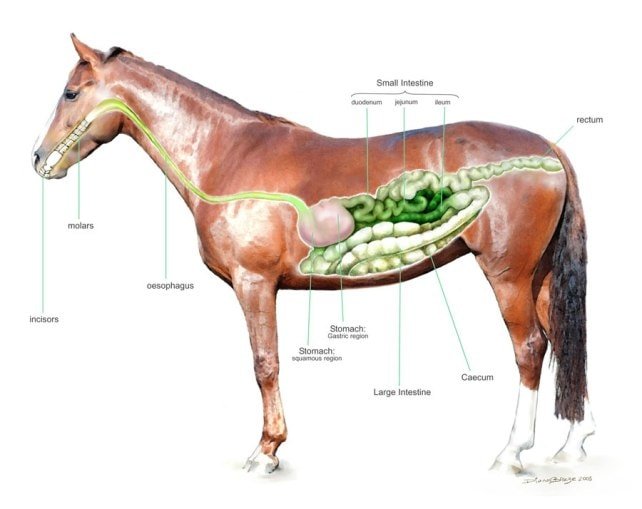 The B complex vitamins, vitamin K and microbial proteins are synthesized by cecal microflora. The cecum may hold as much as 34 litters of ingesta and feed is held for a longer period compared to the previous part of the digestive system to allow to fermentation takes place. The Function of Large Intestine

Read Also:15 Most Popular Race Horse Breeds You Must Know As A Horse Racer

After leaving the right dorsal colon, ingesta enters the small or descending colon. The small colon is about 3.5m long and empties into the rectum. Feces are voided via the anus, the posterior opening of the digestive tract.

From a practical standpoint, the following should be borne in mind relative to the horse digestive system. The limit of voluntary dry matter consumption is 3.4% of body weight per day and to maintain normal horse digestive system function should receive a minimum of 1% of its body weight per day as long stem hay or pasture. Horses receiving a large amount of feed per day should have to eat split into several smaller feeds.

Very few people who are not professionally involved with...
Dog

Cushing’s disease in dogs is also known as Hyperadrenocorticism...
Horse

Horse Eventing: The Most Important Points About This Equestrian Sports

Eventing or Horse eventing is the supreme test of...
Horse

The Buckskin is a favorite, well-known horse breed of...
© Copyright - 2022. All Rights Reserved.