Mastitis in cows is the most economically significant disease in the dairy industry. Mastitis is the inflammation of udder and milk parenchyma, hardening of the udder, decreased milk production, and changes in the milk both physically and increase the somatic cell count in milk. Mastitis causes the loss of dairy farms in multiple ways, like loss of milk production, deterioration of the milk quality, increased treatment cost, the blindness of milk teats, premature culling of productive dairy cattle, and reduced reproductive performance the dairy farm.

Bovine mastitis is the most talked disease of dairy farms. The disease is distributed throughout the world, including the United States of America, European countries, Africa, Asia, North America, and Australia. The disease can be treated with antibiotics and supportive measures. The mastitis can be prevented by taking adequate measures like maintaining udder hygiene, sanitation of the cow barn, clean food and water supplement, and maintaining a milking schedule.

What is Mastitis in Cows?

Inflammation of the mammary gland or udder is called mastitis. The term “Mastitis” is derived from the Greek word ‘Mastos’ for breast and ‘itis’ for inflammation. The disease is recognized by physical, chemical, and bacteriological changes in the milk and pathological changes in the glandular tissue. It is a primary endemic disease of dairy cattle, and milk-secreting tissues and ducts of the udder may be damaged, or sometimes permanent damage can occur. Causes of Mastitis in Cows

Types of Mastitis in Cattle

There are different types of bovine mastitis that are classified according to three different criteria. The criteria are clinical symptoms and mode of transmission and the causal agents. 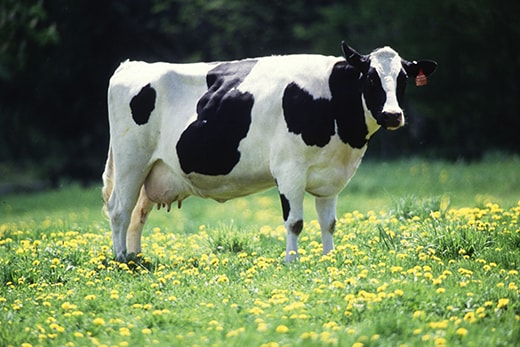 Mode of Transmission of Bovine Mastitis

Mastitis is distributed worldwide. High incidence has been recorded during the third lactation in cows and fourth lactation in buffalo cows, and high risk during the first two months of lactation. The disease is transmitted by infected udder, environmental contamination, injured teat, vigorous sucking, defective, or faulty milking machine. Other transmissions by the contact of the milking machine and milker’s hands by milking from infected quarters.

What are the Symptoms of Mastitis in Cattle?

The most important clinical findings of mastitis in the early stages in the appearance and consistency of the milk and swelling, heat, and edema of the affected quarters. It is necessary to grade mastitis clinically for the appropriate selection of therapy. Diagnosis of Mastitis in Cattle

How do you Treat Mastitis in Cows?

Your vets will perform the successful treatment of your animal. The success of treatment depends on types of causal agents, stage of severity of infection, and proper selection and administration of drugs. Broad-spectrum antibiotics like ( amoxicillin, streptomycin, azithromycin, ceftriaxone) should be given in your animal. Antibiotics are administered both by injection or by the intra-mammary route: additive or supportive treatment needed for mastitis like corticosteroids (dexamethasone, prednisolone) injection to reduce inflammation. Oral administration of cobalt to enhance the antibiotic activity. Dextrose-saline 5% (not in high fever) to supply nutrients and eliminate toxins from your cattle’s body. Antihistaminic drugs should be given where extensive tissue damage and severe toxemia occur. Application of cold therapy- crushed ice in canvas bags, suspended around the udder, reduces the absorption of the toxin.

Management, Control, and Prevention of the Mastitis in Cows

Management, control, and prevention are essential for the mastitis of a dairy farm. Awareness of dairy farmers and control of the source and spread of the organisms should be needed.

There are some causes that treatment does not respond. These reasons are-

Effects on Milk Composition due To mastitis

The severity of the infection, secondary physiological changes that alter the metabolism of mammary cells of the cows may keep the effects of mastitis on milk composition. The epithelial cells are disrupted, or milk components are destroyed by enzymatic action. The disease can cause a decrease in potassium and an increase in lactoferrin. It also decreased the major protein in milk that is casein.

Final Advice on Mastitis in Cows

Mastitis is a widespread and economically important disease of dairy farms. The organisms responsible for the disease are mostly present in the environment, and infection occurs due to poor udder hygiene and lousy sanitation of the cow barn. As a good farm owner, you can control and prevent 90% of mastitis incidence on your farm by adequate preventive measures. The information I have provided in my article will help you take these preventive measures. I think this article will enhance your knowledge and give an economically viable and healthy dairy farm.

Cats are the most adorable pet animals in houses...
Dog

Osteosarcoma in dogs is the most common bone cancer...
Horse

Equine Herpesvirus-1 (EHV-1) infection is one of the most...
Horse

The Hanoverian horse is one of the most versatile...
© Copyright - 2022. All Rights Reserved.