The Cavalier King Charles Spaniel is a friendly, gentle, and affectionate dog breed. They are gorgeous dogs who show their enjoyment when they are in the company of humans and other pups. The dog is a trendy companion dog due to their small size and love of people.

Now keep reading for everything you need to know, including history, health issues, fun facts, and how much training, exercise, and care they need. 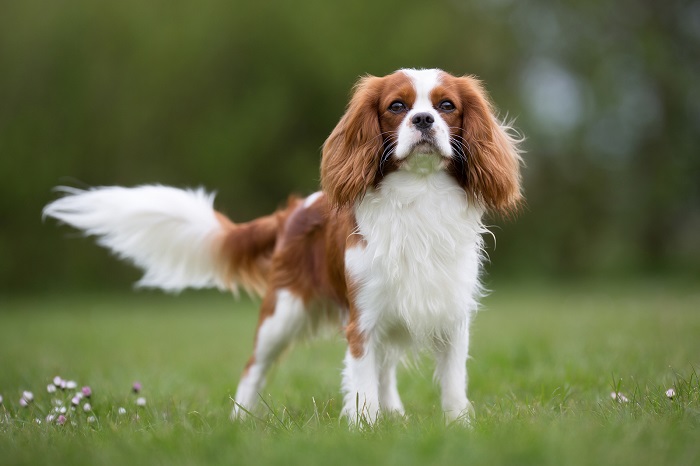 However, it had become rare by the late seventeenth century and almost disappeared. The breed wasn’t revived until the 1920s when an American came to Britain looking for the breed he’d seen in old paintings.

For five years, he offered money for the best old-type spaniel at the Crufts Dog Show, stirring a revival of what was to become known as the Cavalier King Charles Spaniel. The breed has followed in the United States and the United Kingdom since, becoming more popular than the original King Charles Spaniel, the English Toy Spaniel in North America.

The Cavalier King Charles Spaniel is small, well-balanced, and graceful. The skull is slightly rounded but appears flat because of long, high-set drop ears. The full muzzle is slightly tapered, and the eyes are round, large, and dark. The nose is black with large nostrils. The tail is naturally long; occasionally, it is docked to two-thirds its length. The coat is moderately long, silky, and straight or slightly wavy, with feathering on the ears, feet, back of the legs, and tail.

The coloring patterns of the dog breed can be: This is a gentle, friendly, and affectionate dog that is easygoing and gets along with almost everyone. This adaptable dog does well with a family or individual in the city or the suburbs.

The dog is active, intelligent, and playful. They are well suited for small apartments and big lawns. You must ensure the following care and management for your lovely toy dog:

The dog is generally healthy and needs minimum care. You must ensure regular vaccination against potential viral diseases. The dog needs periodic deworming to keep it healthy and safe. The following diseases are frequently seen in this breed:

The dog is a sweet, petite, affectionate breed eager to please its human companion. They are highly playful and active. The puppies are highly demandable to kids. They need very tiny space and can be kept comfortably in small houses. You can purchase puppies from the reputed Kennel Club. The regular price of puppies ranges from US$ 500-1500. The Black and Tan parti-color pups are said to be the rarest of the coat colors accepted by the AKC, although some people would argue that it is the Tricolor. The Duke of Norfolk was also the Blenheim type but developed the black and tan variety. The tricolors were called Prince Charles. The ruby color was the last color to be developed in the breed.

The Cavalier King Charles Spaniel is a loyal, intelligent dog breed. So that’s all about how you control or maintain your Cavalier dog. Besides, if you want to know about the other dog breed, just input your question in the article comment box. Our support will reach you soon.

In this article, I have discussed an in-depth overview of the Cavalier King Charles Spaniel feathers. We think it will help you choose the right family companion for your home. We hope you will gain complete guidelines for maintaining your lovely pets. Thank you for your time.

Infectious Bovine Rhinotracheitis was first recognized in the United...
Horse

Haflingers are the hardy and healthy animal and very...
Dog

The healthy dog is vibrant, alert, and almost always...
Birds