Dales Pony is one of the native pony breeds of England. The breed is strong, hardy, and hardworking pony horse breeds. The breed was developed from few horses for working in the Lead mines of Dales of Yorkshire. The Dales Pony was extensively used in both world wars by the British Army for pulling Artillery guns.

Most Important Information on Dales Pony

Dales Pony is one of the famous native pony breeds of the United Kingdom. The Pony has many attractive qualities that you can select as your passion horse. I shall discuss the most common facts and information on the pony breeds for your easy understanding of my article. The Pony can be used in any discipline of equestrian sports and personal works. Origin and History of Dales Pony

The history of modern Dales Pony related to the history of lead mining in the Dales of England. The lead mines are located in the Dales of Yorkshire, Derbyshire peaks of the Scottish border. The miners used the Pony as pack animals, and one Pony can take around 11o kgs of loads. The modern Dales pony descended from several horse breeds like the Galloway pony, Norfolk pony, and Darley Arabian. Dales’ trotting ability was improved by the bloodline of Thoroughbred, Norfolk Trotter, Clydesdale, and Yorkshire Roadstar. The bloodline of Cob stallion was added to increase the size of the Dales. The Dales pony is a well-build pony breed with a straight head, broad forehead, bright eyes. The neck is in the right length, joining with strong withers. The body is short, and the back is a little short, the chest is broad with a deep rib cage. The legs are muscular, hardy, and well defined. The mane, leg, and tail feathers are silky, straight, and abundant. The average height of the Pony is 14 to 14.2 hands ( 56 to 58 inches). The measurement of the circumference is about 68 inches. The average weight of the breed is 1100 pounds or 450 kgs. They can take weight around 300 pounds in mountain terrain as a pack animal. The primary color of the Dales Pony is black. The other horse colors like bay, brown, roan, and grey, are also accepted. The white markings on the head are accepted for the breed. The other horse markings like a snip, blazes, stripes, and white muzzles are not accepted markings. The small amount of white marking above the fetlock joint of hind legs are also accepted.

Dales Pony is strong, muscular, powerful, and has a great deal of energy. They lift the hooves well clear from the ground. The horse is alert, courageous, but kind and calm animals. They can be easily trained and excellent rides for kids and beginners. 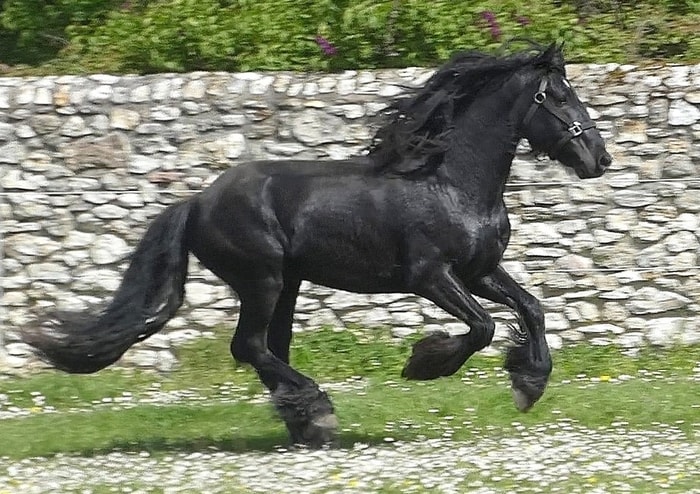 Dales Ponies are known to be carriers of a fatal genetic disease, Foal Immunodeficiency Syndrome (FIS). In a genetic test in 2010, it is found that 12% of Dales Pony of England is carriers of this gene. The FIS is a recessive disease that affects the foals born from carrier animals, both dam and shire. The foal borns normal but day by day, the immunocompromised disease appears like anemia and some untreatable infections. The foal died after three months of age. As a breeder, you must do a genetic test before going for breeding. In 1916, a studbook was opened for the Dales Pony Improvement Society in England. The Clydesdale horse bloodline threatened the qualities of Dales. In 1994, the Dales Pony Society of America was formed.

Dales Ponies are multipurpose horse and used in many sectors and disciplines. The main uses of the Pony breed are: Interesting Facts About the Pony

The Pony is famous for many reasons to horse lovers. The interesting facts are:

Dales pony becomes extinct after World War-II and later become famous. The horse was exported to North America and Australia in the 1980s and becoming popular day by day. Many horse lovers like the Pony due to its versatile uses and calm behavior. They ideal for agricultural works, endurance riding, pleasure riding for kids, and equestrian sports. You can choose the pony breed at your home that will increase your pride and pleasure.

Horses are one of the mysterious creature of Almighty...
Companion Animals

Dogs are an important part of human society on...
Farm Animals

Brucellosis in cattle is a significant disease of man...
Dog

A cataract in dogs is any opacity within the...
Horse

Headshaking in equines can have many possible causes, not...
Horse