Cleveland bay is one of Britain’s oldest horse breeds in Yorkshire in the early 16th century. The horse is medium in size and well muscular. The color of the horse is always bay and origin in the Cleveland district. Thus the name of the horse become Cleveland Bay. The aim of the development of the horse was as a packhorse and gained a nickname “Chapman Horse”.

The packhorse was later cross-bred with Thoroughbred, Barb, Andalusian, and Arabian horses and attained at the present state. By the passes of time, the horse becomes lighter and more pleasing and mostly used as carriage and pleasure riding. Due to the industrial revolution and mechanization, the number of horses decreases. At present, the horses’ population decreased to a critical level, and the breed is declared endangered.

Cleveland Bay is one of the most popular and native horse breeds of the United Kingdom. The horse breed was patronized by the Royal Family of the British Emperor. In my article, I shall highlight the most critical points on this versatile horse breed. I think you will be benefitted from this information. 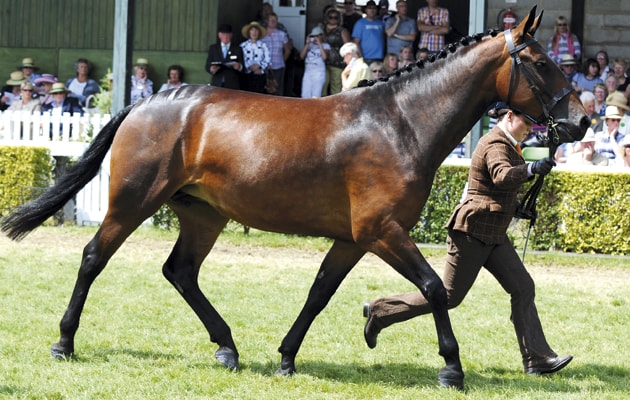 1. History and Origin of the Breed

The horse is one of the oldest and native horse breeds of England originated in the Cleveland district of Yorkshire. The horse does not belong to heavy horse breeds of Britain. In the middle ages, Yorkshire’s people arranged a race of clean legged horse that was bay in color. The horse was used in general-purpose, pack animals, and pillion. Chapman used the horse to carry goods of the traveling salesman and known as “Chapman’s horse”.

The initial development of horses by the cross-breeding of Chapmen horse, Andalusian, and Barb mares. The Andalusian blood comes from Spain’s Cordova, and Barb blood comes from the Grand Tour of Europe. From 1685 to 1785, the horse was developed as a medium draft or agricultural type. At that time, the road conditions of England were not good. As the road’s condition improved and more speed needed, the horse was crossed with Arabian and Thoroughbred horses. The horse became lighter, strong neck, shoulder, and speedy. 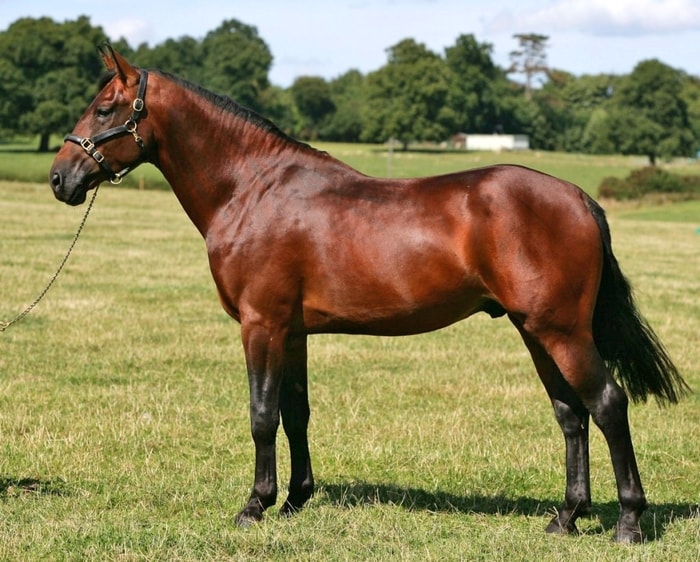 The Cleveland Bay Horse Society of Britain was established in 1883, and the first studbook was published in 1884. During the later half of the 1900 AD, Cleveland horses’ export started to Australia, New Zealand, India, Russia, United States, South Africa, and European countries. The first Cleveland Bay was imported to the United States of America in 1884 in Maryland, Massachusetts, and Virginia.

Cleveland is a semi-draft horse that is medium in size. The head is the large, heavy, and well-muscled neck, broad and deep chest, well-muscled wither, croup is slightly sloping, the shoulder is sloping and muscular. The legs are heavy, healthy, and shooter concerning the body. The legs have little or no feather as the horse was developed to work in the clay or unclean environment. 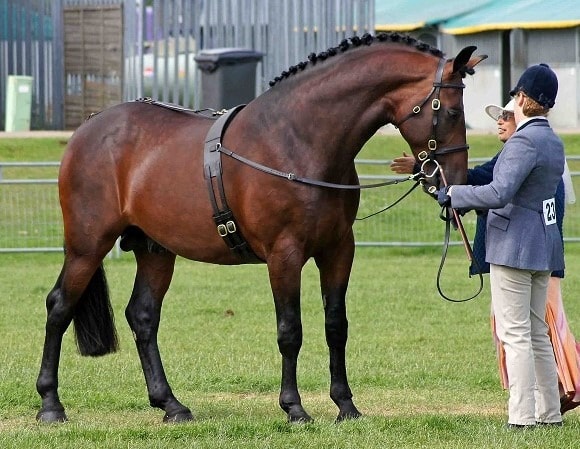 4. Height and Weight of Cleveland Horses

The Cleveland Bay horses are semi-draft horses, and the average height varies from 16 to 16.5 hands (64 to 66 inches). The average weight of the horse from 1300 to 1500 pounds (550 to 700 kgs). Initially, the horse was developed to carry goods, the agricultural field, and pull coaches. Later, horses’ use shifted to pull artillery guns, and more speed was added by breeding with Thoroughbred and Arabian horses. The horse becomes lighter and speedy. 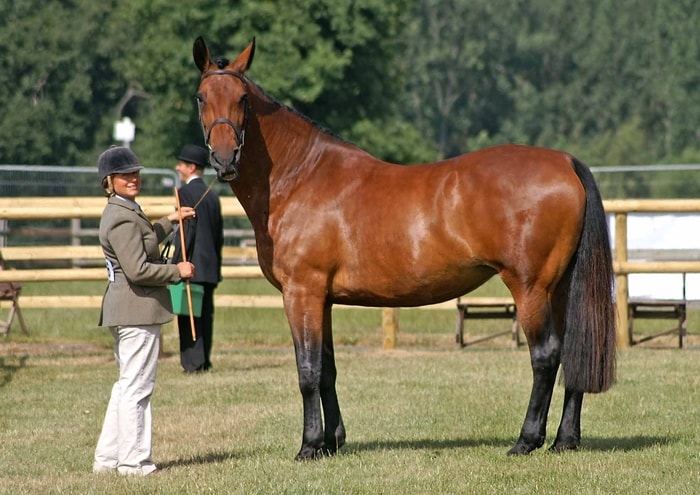 5. Color and Markings of the Horse 6. Behavior and Temperament of Cleveland Bay

7. Care and Management of Horse

The horse was developed in the harsh environment of Yorkshire. The horse requires less care than other draft horses. The horse requires daily grooming, weekly bathing, periodically clipping of mane and tail. If the horse having feathers, you need to clip at regular intervals. You must set the horse stable on open and high ground with good ventilation and lighting facilities. You can keep some open space for the exercise of the horse. You must maintain a regular feeding schedule for your horse. 8. Diet and Nutrition of Horse

The diet of the horse must have protein, carbohydrate, fat, vitamin, and minerals. Cleveland horses’ usual diet is corn, gram, cowpea, soya bean meal, oats meal, and green grass. You can allow your horse in the pasture instead of supply green grass in the manger. The horse must have free access to pure drinking water round the clock. The horse may need supplements like vitamins, minerals, skin supplements, hoof supplements, and improves health status. You must consult with an equine nutritionist about the healthy diet of your horse. 9. The Health of the Horse

The horse is generally healthy and is not affected by any specific disease. The horse is affected by usual equine diseases. You must maintain a vaccination schedule by your local equine veterinarian. You must give anthelmintics every three months with a broad-spectrum drug. Regular vaccination, deworming, and a health check-up will give you comfort and healthy horses. Cleveland Bay is a versatile horse breed and used for many purposes and disciplines. The common uses of the horse are: 11. Where to Buy Cleveland Bay?

Cleveland horses are considered rare horses, and you can find the horse in many publications and websites as an ad. Many horse breeders sell the horse privately online. You can get the pure breed Cleveland bay horse from CBHSNA (Cleveland Bay Horse Society of North America). You can support the development and distribution of the horse by getting the membership of CBHSNA. The demand for the horse decreased due to the increased mechanization and discovery of steam engines. In the year 1930 and onwards, the population of horses started to decline. In the year of 1962, only four purebred stallions were present in the United Kingdom. Queen Elizabeth II saved the horse breed by purchasing and starting breeding in the Royal Stables. Duke of Edinburg, Prince Philip used the Cleveland horse in international driving competitions. Queen Elizabeth acts as a patron of the horse breed, and in 1984 She became the president of the Horse Society. British Cleveland bay horse society separately maintains the breed registry of the horse. In 2005, less than 550 horses were present in the world, and 220 were mares.

The versatile horse breed is known for its strength, beauty, size, and multidimensional uses. The horse is a native pure breed of England and one of the oldest horse breeds in this region. The Cleveland horses were patronized by the British Royal family and become the Royal coach horses. The horse population is decreasing day by day, and less than 50 foals are registered yearly. In my article, I have tried to provide all possible information about the horse breed. You will be happy to know the breed and will surely be benefitted from my article.

Kissing Spines in horses is a slow, degenerative condition...
Cat

Cats are the most lovely pets in the house....
Farm Animals

Foot-rot in sheep is a contagious bacterial disease of...
Farm Animals

Vesicular stomatitis in Horses is characterized by the development...
© Copyright - 2022. All Rights Reserved.